The first 100 supporters of Cure Leukaemia, including footballer Ben Foster, who have ‘donated their name’ for a new wall of plaques housed in the globally significant Centre for Clinical Haematology at the Queen Elizabeth Hospital in Birmingham, have had their plaques installed today to mark World Blood Cancer Day.

The Cure Leukaemia Family wall allows supporters of the charity to display a lasting reminder of their backing for the charity by purchasing a plaque, with the aim of funding a specialist research nurse for one year.

These nurses connect blood cancer patients that have exhausted standard treatment with potentially life-saving drugs through clinical trials. Many of the one hundred plaques already donated are from patients or families that have benefitted from these treatments.

Plaques are available for supporters to donate their name, the name of a loved one, or even a thank you to a nurse or doctor for either a one or three-year period, after which they will have the opportunity to keep the plaque in place with a further donation.

Creative agency OWB Creative, who designed and produced the wall and the website where donations are made (www.donateyourname.org), generously sponsored 20 plaques for the staff that work on the ground floor of the Centre allowing them to be recognised as well.

Some well-known figures have donated their names including Watford goalkeeper and Cure Leukaemia Patron Ben Foster, ex-England and Wolves footballer, Patron and former patient Geoff Thomas and Chief Executive of the Greater Birmingham Chamber of Commerce Paul Faulkner who is also a Trustee of the charity.

Many people have chosen to remember a family member on wall, including John Bray, from the BBC, whose plaque in memory of his father reads: ‘Clive Bray – our special Wolves fan’.

While another patient Lizzie Dean’s plaque is also added to by one from her mum, Jane Young, reading: ‘Thank you for mending Lizzie Dean’.

Cure Leukaemia Chairman Ian Allen and his wife Sarah have donated as has the charity’s Co-Founder Graham Silk, a former patient himself, who’s plaque references Julie Arrazi, the first ever nurse funded by Cure Leukaemia who treated him. While other key supporters have donated their name, including Doug McKinnon, with the Latin words ‘Non desistas non exieris’ translated as ‘Never give up, never surrender’.

Wolves fan Mick Goater and CL Champion Jess Hempshall have donated and travelled all the way from Yorkshire to appear in the photo. Jess said:

“The charity saved the life of my friend Fiona so I was only too happy to donate. I really hope people fill the wall as soon as possible because these fantastic nurses are saving lives and it is great to play your part.”

Cure Leukaemia CEO James McLaughlin, who has himself donated a plaque said:

“We saw how popular the Donate Your Name concept was with the shirts and we felt the model could also transfer to a wall at the Centre. Once this wall is filled it will fund one of our nurses and the hope is that it will remain full indefinitely and provide a form of regular donation for Cure Leukaemia.” 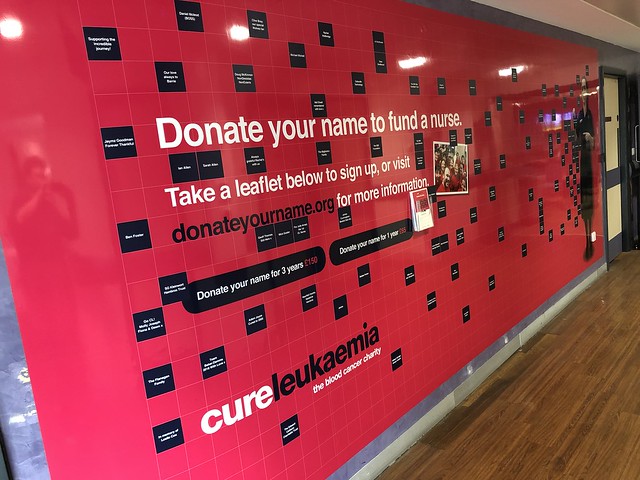 In total there are 1,000 spaces for ‘Donate Your Name’ plaques.

There are three options for those wishing to donate: