The inaugural Copa Del CL proved a fantastic success as football fans and former players joined forces for a tournament at St George’s Park to raise money for Cure Leukaemia.

The six-a-side tournament at the magnificent England training base proved hugely competitive, but also plenty of fun, as 16 teams battled it out for the coveted trophy.

On the weekend of the big Aston Villa/Birmingham City derby, it was also a sign of things to come that the tournament was won by the ‘Anvillians’ team, the brainchild of actor and Villa fan Nigel Boyle who has appeared in the BBC’s hit show Line of Duty, and including Villa heroes Ian Taylor and Lee Hendrie.

Other former players who rolled back the years on the pitch included Matt Le Tissier, Stiliyan Petrov, Darren Purse, Jody Craddock, Lee Naylor, Maik Taylor and Tommy Johnson, whilst Matt Murray and Geoff Thomas, a Patron of Cure Leukaemia, were among the team managers. 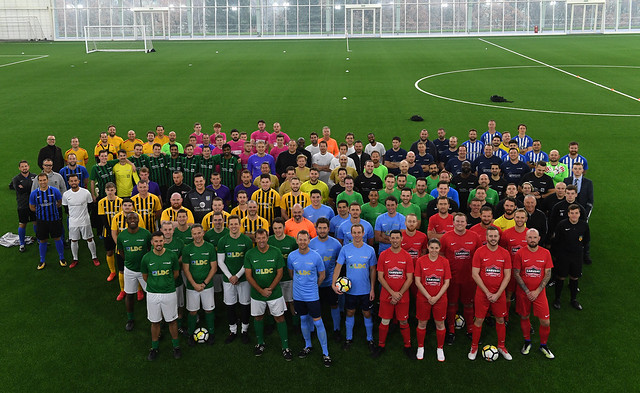 Matt’s team – PD Financial Management – included Maik Taylor, Stiliyan and Lee and were the beaten finalists to Anvillians, but unfortunately Geoff was in charge of the Cure Leukaemia side which, despite the inclusion of Darren Purse, exited the tournament with zero points and zero goals!

“My team didn’t have the best of fortunes but it was a great day,” said Geoff, himself a former England international.

“Sadly leukaemia is a disease which has affected footballers up and down the country and, while things are improving, there is still an awful lot of work to be done.

“It is great to have a tournament like this and see the guys put the boots back on again for such a good cause, and you can see that they all still want to win!”

It was 15 years ago that Geoff received his leukaemia diagnosis, and, having initially been given three months to live, the work of Professor Charlie Craddock CBE, one of the founders of Cure Leukaemia, and a stem cell transplant from sister Kay helped him make a full recovery.

In more recent years Villa star Stiliyan was diagnosed with leukaemia in 2012, quickly followed by Jody Craddock’s two-year-old son Toby, and then Wolves goalkeeper Carl Ikeme in the summer of 2017.

All three are now thankfully in remission.

“I always enjoy playing football again, and it is a great pleasure for me to be taking part in the event,” said Stiliyan.

“Cure Leukaemia have been wonderful over the years and Geoff has been a great ambassador in raising funds and awareness – he has been immense.

“It is fantastic to see so many people taking part in the tournament and supporting such a great cause.”

Jody added:  ‘As an ex-professional these are the events you want to get involved in because you want to keep playing football.

“My son Toby had leukaemia and we have all seen Carl Ikeme fighting the disease over the last year or so.

“Every little bit helps, and events like this help keep up the awareness and get people involved helping the charity.”

On the football side the two top teams from four groups of four qualified for the knockout stages, and some standout performances included Matt Le Tissier, who recently turned 50, kicking off the event in trademark stylish fashion.

“I managed to score a couple of goals in the first game but then felt a bit guilty in the second, as I leant back and hit a left foot shot that probably struck the roof,” he said.

“Maybe that was a case of trying to get used to being given the centre forward’s number 9 shirt after getting used to 7 during my career!

“In all seriousness, I enjoyed playing for the LDC team. It was a great day out for a fantastic cause at a world class facility, and there was a really good turnout of former players.

“There is nothing more important to people in this country than finding a cure for all types of cancer, and we have all been touched by the disease in some way.”

“It’s just like the old days with me telling him what to do, like I had to do when I was in goal for Wolves,” he quipped.

“On a serious note though, it is a great to come here to these unbelievable facilities, where I used to work for Nike Academy.

“With what happened to Jody’s son, and to Carl and everyone else, this charity is one which is close to our hearts, and they do some fantastic work.”

The evening saw former Villa and England star Paul Merson deliver an entertaining after-dinner speech, while leukaemia patient Lizzie Dean told her own emotional story about a four-year battle with the disease.

Cure Leukaemia CEO James McLaughlin was delighted with how the day went.

“It was a fantastic event with a great atmosphere at St George’s Park, but also plenty of fun, and some top former players who really got into the spirit of the competition,” he said.

“It was all followed by a great social event in the evening, all expertly hosted by Johnny Phillips from Sky Sports.

“We have received some terrific feedback from the teams involved, and plans are already underway for the 2019 Copa Del CL with all the details to be announced soon.”

Anyone who would like to register their interest in taking part in 2019 is asked to email beapro@copadelcl.co.uk. Cure Leukaemia would like to thank Global Football Pro, PD Financial Management, and St George’s Park for their help in sponsoring or staging the event.