A record number of Deutsche Bank volunteers across the globe took part in a 24-hour Hackathon event to design prototypes for a mobile app to benefit blood cancer patients worldwide.

The technological expertise of 800 of the bank’s staff was offered to one of its UK Charities of the Year, Cure Leukaemia, and the volunteers located in London, Hong Kong, Singapore, India, Romania, Germany, Russia and the United States worked through the night to create a range of prototypes for the charity. All of these designs will now provide the foundations for Cure Leukaemia to build on to make the app a reality.

‘She Hacks!’ an all-female winning team based in London, developed a prototype called Sanguine, derived from the Latin for blood - and also a term for being positive. Using a friendly interface and clever programming, the app suggests “buddies” with similar diagnoses, age and gender. It also curates articles from trusted sources and keeps track of a patient’s wellbeing and key statistics. Patients can choose to share this information with friends, family, buddies or doctors, as well as fetch blood test results and report their daily progress.

Commenting on their victory, She Hacks! said:

“It was a lot of fun to pull together across a diverse range of technical perspectives and seniorities to produce a prototype solution that focussed on the needs of leukaemia patients, their families and carers. We all worked on something new in terms of technologies or platforms, splitting our responsibilities across design, user interface, backend, release and even automated testing.

“As an all-female team with a range of technical backgrounds, everyone in the team had an important part to play.”

"Events like this reflect the bank’s ambition to be a tech-led company and to be innovative. Cure Leukaemia is a brilliant cause and I hope the teams have fun and build contacts that last above and beyond the Hackathon.”

“It was a huge privilege to be involved in this truly global event that has the potential to change the lives of blood cancer patients worldwide.

The wealth of talent and innovation that was displayed by the volunteers during those 24 hours was clear to see and we now have a huge number of ideas to draw upon to make this app a reality.

On behalf of all the patients that could benefit from the results of the Hackathon I’d like to thank everyone that took part a contributed to its success.”

Cure Leukaemia’s CEO James McLaughlin who spoke passionately to the participants and handed out the awards said:

“This was an event we will never forget and further emphasises how transformational our partnership with Deutsche Bank will be.

We are immensely grateful to all the volunteers that took part in the Hackathon and we now need to ensure these great ideas become a reality to benefit blood cancer patients across the world and create a lasting legacy for our partnership with Deutsche Bank.”

Current and former leukaemia patients joined the Hackathon in London, sharing their experiences and offering the teams a unique sounding board for ideas about how to develop the app. Brooke Evans, was diagnosed with Leukaemia aged 17 and treated at the Queen Elizabeth Hospital in Birmingham. In September she will start working as a haematology nurse at the same hospital she was treated in. She said:

“I know only too well how much it means to have someone to talk to and all the mountains of lengthy but useful information you are given.

I’m so glad I had the chance to share my story and hopefully make a difference to more patients by being that success story and giving people hope.”

A panel of judges from across the bank evaluated the prototypes based on four categories. A winning team from each country was shortlisted and a winner chosen in each category.

Aside from winning the admiration of their colleagues, the winning teams will get to see their ideas, designs and code used to help produce the final design and resulting app.

The event was promoted and shared widely on social media with hundreds of tweets and LinkedIn, Facebook and Instagram posts, including celebrity endorsements, from Gary Lineker, Ian Wright and Matt Le Tissier from the world of football and even film star Mark Hamill. England football manager Gareth Southgate also showed his support prior to the event.

More information about the winning application, how the Hackathon was put together and the technology behind it will follow over the coming weeks. 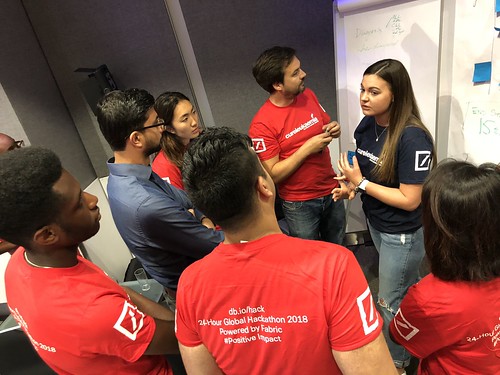