Our Chief Executive, James McLaughlin, ran 180km between November 12th and December 11th2020 to address the £1,500,000 shortfall we face after the COVID-19 pandemic. James raised close to £13,000 during his ‘Tour of the TAP’ challenge with additional fundraising from clinical staff at the blood cancer centres Cure Leukaemia funds across the UK taking the grand total beyond £21,000 raised. 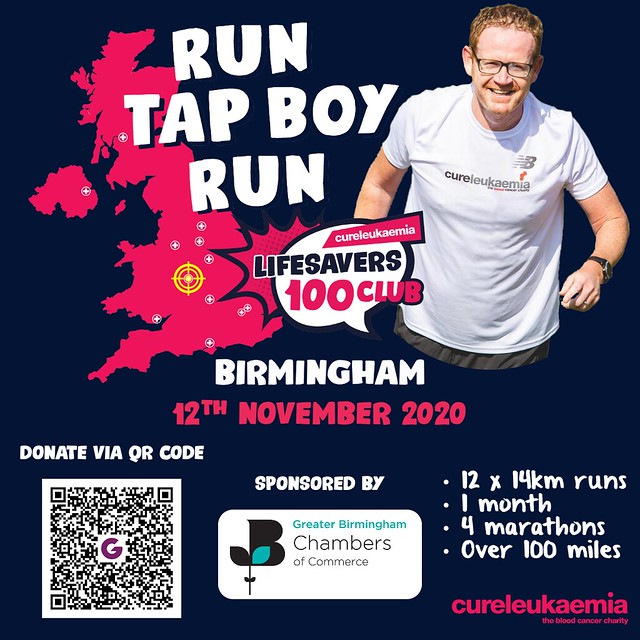 James took on the challenge to run 14km for each of the 12 blood cancer centres Cure Leukaemia funds within the UK Trials Acceleration Programme (TAP) to not only raise funds but also awareness of the fact a person is diagnosed with a form of blood cancer in the UK every 14 minutes. The challenge gained momentum throughout the month with many of Cure Leukaemia’s supporters donating, running in support or sponsoring the 12 legs of his challenge.

For the Manchester leg of ‘Tour of the TAP’ Aston Villa fan Steph Price and mother of teenage leukaemia patient Harry, set James an additional challenge of running 14 miles wearing a Villa shirt for that leg if they managed to raise an additional £1,400 on his page. This was then taken to another level by fans of Wolverhampton Wanderers who raised over £3,000 to ensure he wore their club colours for the final leg on December 11th.

He also received support from Birmingham City supporters club Blues 4 All, Warwickshire County Cricket Club and Paris Smith, a legal firm in Southampton, meaning he wore shirts representing those regions and clubs for various legs of the challenge.

Two Cure Leukaemia supporters, Amira Mumtaz and Kevin Hoskins, also ran the full 180km remotely to show their support for James and the charity. Amira, from Solihull, is the mother of 5-year-old Aiya who is in remission from blood cancer after being diagnosed at just 2 years old. She said:

“I was so inspired to hear about what James was doing to raise funds to help patients across the UK who are in the same position my little girl was 3 years ago.

I wanted to do what I could to support and I’m so glad we were able to raise much needed funds and awareness over the month.”

James’ intention was to personlise his motivation for doing the challenge by connecting with blood cancer patients across the UK such as Stephen Barr, 65 from Shropshire, who was at the finish line at the Centre for Clinical Haematology in Birmingham to see James complete his challenge. He said:

“I am so grateful to James and all who raise funds for charities like Cure Leukaemia. Without them, I would not have been able to access a clinical trial that has meant I have been able to meet my third granddaughter for the first time.

Every day for me is a blessing and I wake with a smile, forever grateful for the chance to access a clinical trial thanks to the network Cure Leukaemia funds and it was an honour to meet James at the conclusion of his challenge.”

During ‘Tour of the TAP’, James burned over 17,000 calories and took over 200,000 steps during the 180km he ran and after the success of the event during such challenging times plans are in place to make the event bigger and better in 2021. He said:

“I initially set out to raise £5,000 to do something positive to address the devastating shortfall we face in 2020. Despite writing to Chancellor Rishi Sunak MP in April we are yet to receive a reply or have any financial support from the government despite many of the nurses we fund being redeployed to the front-line to tackle COVID-19 and the network we fund being able to setup a new clinical study called PACE, during the pandemic.

“I was staggered by the support I received throughout the month from supporters and clinicians doing their own runs, donations, sponsorships and video messages of support from all over the UK. 2020 has been an incredibly challenging year for all charities but this proved what phenomenal supporters we have at Cure Leukaemia.

“The message was clear that this was inspired by patients like Stephen who is alive and well thanks to a clinical trial delivered by the TAP network we fund and little Aiya who is in remission, at school and living her life. It is critical that we not only maintain this network and continue giving patients access to life-saving clinical trials but also continue to raise awareness of blood cancer and the challenges patients have faced and continue to face during the pandemic.

“I would like to express my immense gratitude to everyone that supported me throughout ‘Tour of the TAP’ and we will begin plans to make this event in 2021 bigger and better with the aim of raising even more funds than this year.”