What will your mission be to help put Cure Leukaemia out of business in 2020?

That was the question asked as charity Patrons and former England international footballers Ben Foster and Geoff Thomas met up with potential fundraisers at a special ‘Mission Possible’ networking event staged at The Colmore Building in Birmingham City Centre.

Both Watford FC shot-stopper Ben and Geoff are keen cyclists and are already booked in for Cure Leukaemia’s London to Paris challenge taking place in June, always a popular trip in which riders of all ages and abilities can come together for a fantastic few days. 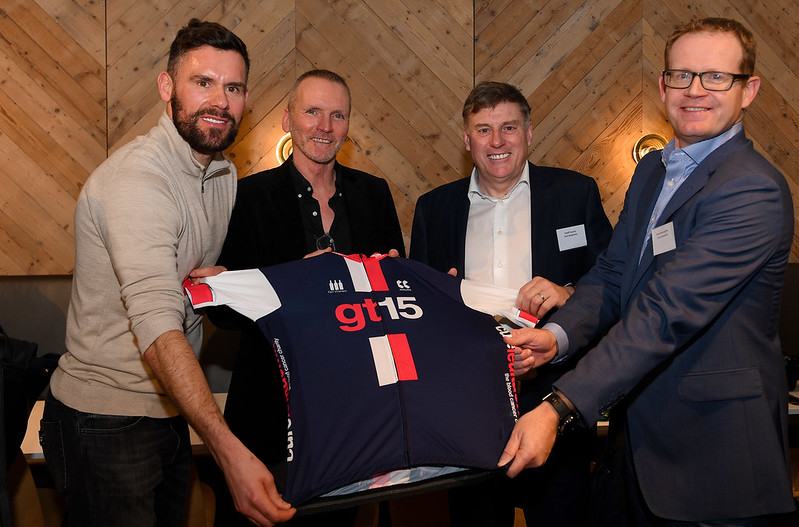 Guests were able to hear not just about cycling challenges this year – including GT15 with Geoff leading a team for the Tour de France one day ahead of the professionals with a £1m fundraising target – but also other team events including the Copa Del CL football tournament at St George’s Park (Friday 16 October), and the Great Birmingham 10k (Sunday 31 May) and half marathon (Sunday 11 October).

There were also a couple of ‘exclusives’ for a sizable audience of corporate guests regarding two new events for Blood Cancer Awareness Month in September with the announcement of a new three-year partnership with the NEC for the Dragonboat Race (Saturday 5 September), and putting together a ‘Colmore Crew’ cycling team for a social ride of either 30 or 60 miles later in the month (Friday 25 September).

“I always love coming along to Cure Leukaemia events, and I love being a patron,” said Ben, who had to endure some mild and good-natured ribbing about his visit to the Second City 24 hours previously as Watford conceded a last minute winner at Aston Villa.

“Being part of the charity feels like being part of a family, and when I was asked to be a Patron last year, I was genuinely honoured that people thought that much of me that they would ask me to take on the role.

“I will always try and support the events when I can, especially with my enjoyment of cycling, and I have great memories of London to Paris in 2015 which was part of my recovery from a knee injury.

“This time around the dates have fallen perfectly to give me the chance of some really good fitness work during the close season, and also having plenty of fun at the same time.

“It is a fantastic event, open to cyclists of all ages and abilities with a great spirit of everyone pushing each other on, and I am really looking forward to being part of the team for 2020.”

Cure Leukaemia rent office space with Orega Offices in The Colmore Building, and were joined by other companies from within the building as well as from outside as they embark on a very exciting period in the charity’s history.

Three of the four headline day sponsors for this year’s London to Paris – Culture Recruitment, Rudell the Jewellers and Whey’d – were also able to view the new kit for the 2020 event, designed by Kalas.

“The aim is to encourage people to become our ‘agents’ take on challenges, or ‘missions’, to support Cure Leukaemia both in not only saving lives but also working towards finding a cure for all blood cancers to ‘Put us Out of Business’ as a charity once and for all.

“With Cure Leukaemia now having gone ‘national’ to fund 12 Blood Cancer Centres around the UK with a catchment area of over 20 million people, we are going to need more and more support from people and businesses through fundraising, and remain so appreciative of all who take on a ‘mission’ for the charity.”

Both James and Cure Leukaemia Chairman Geoff Cousins have signed for this year’s London to Paris, whilst two inspirational patients who have previously completed the challenge having been treated for leukaemia – Jenna Ostrowski and Mark Nicholas – also spoke at the networking event.

Over 130 have already signed up to take part from June 4-8, with only 30 places remaining, and there are also a number of fantastic sponsorship opportunities still available for the event.

Click HERE for all the details on how to book in for the challenge including the pricing and fundraising details or contact jackie@cureleukaemia.co.uk to discuss sponsorship options.

For any other enquiries about how you can get involved in any of the Cure Leukaemia Mission Possible events, email beinspired@cureleukaemia.co.uk.