A great night was had by all recently as the ‘CL Champions’ got together for a social event and catch-up about the charity’s exciting plans for the future.

A group of almost 80 friends and supporters of Cure Leukaemia joined the charity’s chairman Ian Allen, Chief Executive James McLaughlin, patron Geoff Thomas and other staff at one of the club’s newest partner organisations, and sponsor for the night – the Fazenda restaurant on Colmore Row. 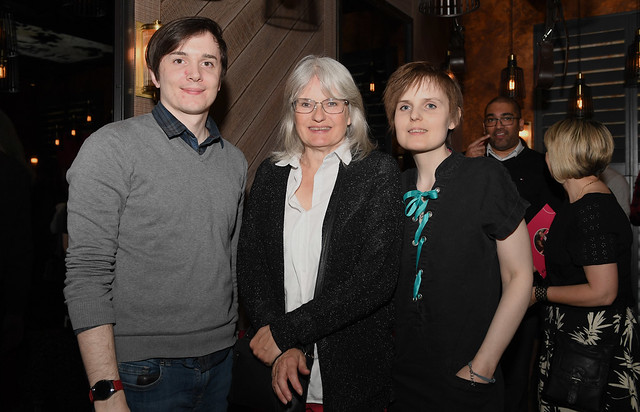 Many current and former leukaemia patients also turned out for the event, including Lizzie Dean, Jenna Ostrowski, Brooke Evans, Harrison Price and his family, and Jaymz Goodman.

Corporate supporters were also in attendance, including professional footballer Mat Sadler, whose Sadler & Partridge property company have become firm supporters of Cure Leukaemia and are sponsoring this year’s Glades football tournament at Solihull on June 8.

Speeches were given by Jane Young (Lizzie’s Mum), describing how the charity had helped them through the last few years, and also James, who thanked guests for their ongoing support and backing for the charity’s efforts to help more and more patients who are diagnosed with leukaemia.

“We are so appreciative of the support that Cure Leukaemia receives from so many people, and we regularly catch up at various events or challenges where funds are being raised for the charity,” said Cure Leukaemia CEO James McLaughlin.

“We thought it was important to put on an event to say thank you to all of our dedicated supporters - the CL Champions - without whom we would be unable to carry out our vital work to help the nurses and clinicians treating patients with leukaemia.

“The efforts of our supporters and volunteers plays such a vital impact in saving so many lives, and we also view them as our Ambassadors to keep spreading the word about Cure Leukaemia and our events to encourage more and more people to get involved.

“We were able to update the CL Champions on plans for forthcoming events and the longer-term future, as well as having a great time just catching up and enjoying a drink and bite to eat.”

The CL Champions have regularly played a huge role in helping Cure Leukaemia, with another excellent example recently orchestrated by Jane Young.

Jane spent a couple of days at the Cure Leukaemia offices telephoning every member of the Velo Birmingham & Midlands ‘team’, to pass on the charity’s thanks, and explain how the charity was so important in saving the life of her daughter.

“It was great to get the opportunity to thank so many of the cyclists who are doing so much hard work in preparing for, and then taking part in Velo,” said Jane.

“I can sit in a chair and speak to people or leave a voicemail to say ‘thank you very much’, which isn’t costing me anything but hopefully means something.

“It is because of people like those riding Velo that I still have my daughter, because Lizzie wouldn’t be here if it wasn’t for Cure Leukaemia.

“She was very fortunate to take part in a clinical trial and she wouldn’t have been able to see the last two Christmases or be bridesmaid at her brother’s wedding without the work of Cure Leukaemia and all their fundraisers.

“And so it is a most wonderful thing that everyone is doing by taking part in Velo and putting in so much hard work to raise as much money as possible.”

*Cure Leukaemia would like to thank corporate supporters Fazenda for their generosity in hosting the CL Champions event.