Dust off the footy boots and oil those creaking limbs - the Copa Del CL is returning to the home of English football this year, this time with a Champions League theme.

Once again a number of footballing legends will be back to do battle, just as they did last year, when former Aston Villa favourites Ian Taylor and Lee Hendrie were both among the Anvillians team crowned Copa Del CL champions.

“We had a fantastic inaugural tournament with players able to savour the world-class facilities at St George’s Park but also the atmosphere and camaraderie you’d expect when former footballers are reunited,” said Cure Leukaemia CEO James McLaughlin.

“The feedback received was overwhelmingly positive, so we are delighted to be putting the event on once again, potentially bigger and better with a Champions League theme.

“And you never know, the Cure Leukaemia team might actually manage to score a goal this year!”

Cure Leukaemia Patron Geoff Thomas and Wolves legend Matt Murray each managed a team, actor from the hit BBC show ‘Line of Duty’ and Villa fan Nigel Boyle was in the winning squad, and the whole event was hosted by Johnny Phillips from Sky Sports with Paul Merson providing the after-dinner entertainment.

“The inaugural Copa Del CL provided the ideal springboard; it is original, ambitious, engaging and team focused allowing our LDC colleagues to lace up their boots and show their on-field talents in a unique location alongside some of the great names of English football.

We look forward to supporting Cure Leukaemia further in 2019 and beyond with an even more exciting tournament.”

Global Football Pro, based at St George’s Park, who organise player experiences and tournaments across the country and internationally are extremely proud to be returning to oversee the football event.

This year’s event will focus around a Champions League theme, as, once the tournament is over, guests will be invited to enjoy refreshments whilst watching the two Champions League fixtures in the company of the legends during the evening.

Taylor, who is a Director with Global Football Pro, is looking forward to another exciting tournament.

“Last year’s event proved a fantastic success and fun-packed day, but, most importantly, it generated both funds and awareness of this cruel disease, helping the amazing work that is being carried out to hopefully find a cure in the not-too-distant future.”

“As former players we are still competitive whenever we get out on the pitch, but there were also many excellent players and lively teams which made for a really hard-fought tournament.

“We are looking forward to another great event with the action on the top-class pitches at St George’s Park then followed by the chance to sit down and watch the Champions League games and chat football – what a day!”

The cost to enter is £2,750 inc VAT per squad (based around ten players) or £3,500 inc VAT for teams who wish to include a football legend.

Sponsorship opportunities will be available – email beapro@copadelcl.co.uk for details. 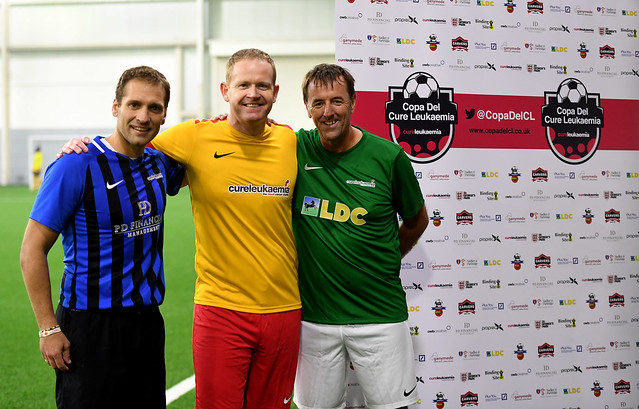