Over 150 runners braved torrential conditions to complete the Simplyhealth Great Birmingham Run and raise an estimated £50,000 for Cure Leukaemia.

A mixture of individuals and groups or businesses overcame the constant downpours to complete the 13.1-mile course, along with thousands of other participants.

The first runner past the post for Cure Leukaemia was Darren Redmond, otherwise known as ‘Super Daz, one of the 34-strong team from Deutsche Bank, with whom Cure Leukaemia enjoys a national charity partnership.

Darren completed the course in 1:26:33, just a week after running the Chester Marathon.

“That was hard and I was shattered when I finished – I felt my calves go after about six miles,” he said after the race.

“It was about digging in and just getting the job done in the end.

“But people suffering from leukaemia go through far worse than running a half marathon, and it was thinking about them that kept me going over the last few miles.

“Hopefully we have all helped raise awareness and a lot of money for Cure Leukaemia.”

One runner who knows precisely how the funds raised by Cure Leukaemia will impact patients is Dave Waldron, a senior charge nurse at the Centre for Clinical Haematology (CCH) at Birmingham’s Queen Elizabeth Hospital.

Dave was part of a ‘Team CL’ contingent of runners which took part in the race, also featuring Cure Leukaemia employees Andrew Wilkes and Georgia Thomas.

Dave, who has raised a staggering amount in excess of £10,500, said: “The atmosphere during the run was fantastic – I loved it!

“The conditions were difficult and I didn’t post the best time but I was out there doing it for the patients and the day after I was back in the centre, also for the patients.”

The Deutsche Bank team, led by Sharon Baker, took part in the Business Challenge and finished second in the men’s event and third in the females, having selected four runners randomly rather than necessarily the quickest.

That Deutsche Bank team was one of the largest groups which took part in the event, with Cure Leukaemia also well supported by other regular partners such as KPMG, the Binding Site, I-Hub Birmingham and Wolves FC.

And one of the runners from iHub, Director of BOSS (Bespoke Office Space Solutions) Daniel McLeod, received some extra special words of encouragement when he was struggling a couple of miles from the finish. (read the full story HERE)

“I’d got my headphones in and was just back on the flat after going up the hill up by Bournville,” says Daniel.

“I was struggling a little bit, and all of a sudden a guy ran up next to me, put his arm around me and gave me a kiss on the side of my head.

“He had clocked my Cure Leukaemia running shirt, and told me his little lad was suffering, and that he just wanted to say thank you.

“I have to say – it half spurred me on and half turned me into an emotional wreck.

“It was the realisation that here I was, running 13 miles in the rain, but this guy and his son were going through it far, far more than I ever was.”

The final figure raised by Cure Leukaemia runners is yet to be finalised, but it is expected to be in excess of £50,000.

“I can’t remember a Birmingham Half Marathon ever taking place in such torrential conditions, but the thousands of runners who took part did themselves - and their chosen charities - proud,” said Cure Leukaemia CEO James McLaughlin.

“From our point of view, we were delighted that so many people decided to run for Cure Leukaemia, raising such a significant amount of money to help in our battle to overcome this horrible disease once and for all.

“The spirit of ‘Team CL’ was very much in evidence with everyone helping each other along to complete what is always a very testing challenge, and we are deeply grateful to each and every one of those who took part.”

Any runners interested in representing Cure Leukaemia in next year’s 10k event on Sunday, May 26th, or Great Birmingham Run on Sunday, October 13th, are asked to email Georgia@cureleukaemia.co.uk. 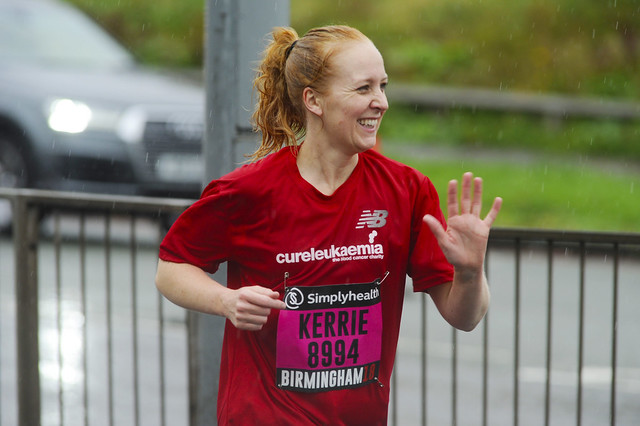