The Centre for Clinical Haematology in Birmingham has undergone a transformative expansion to give patients better access to lifesaving treatments.

In addition, the expansion project has pledged to create 75 new jobs, with some of these posts already filled.

The expansion has been possible thanks to funding from the Greater Birmingham & Solihull Local Enterprise Partnership (GBSLEP), Cure Leukaemia and the Trust.

It fulfils a vision to create a centre of excellence for clinical haematology which combines outpatient and day infusion facilities along with improved access to clinical and research teams when available standard treatments have been exhausted.

Professor Charlie Craddock, CBE, Director of the centre, said: “The expansion will allow the continued growth of our world-class clinical trials programme, ensuring Birmingham will continue to lead the global fight against all forms of blood cancer.

“It will immediately increase the number of lives saved and will speed the process towards establishing effective treatments for all blood cancers within 25 years.”

The centre was established in 2006 and has since treated over 10,000 patients, run more than 60 ground-breaking clinical trials and leveraged over £30 million of free drugs that would otherwise not be funded by the NHS. The expansion will allow these numbers to continue to grow, as well as creating jobs and support inward investment into Birmingham’s thriving Life Sciences sector.

Blood cancer charity Cure Leukaemia made a commitment to raising an additional £1m in 2017 to ensure the Centre’s expansion was fully funded.

CEO James McLaughlin said: “Our £1m Centre Appeal was a huge undertaking for Cure Leukaemia but I am thrilled to announce that we were able to raise the necessary funds for this vital development.

“The support we received from trusts, foundations, major donors, corporate partners and all our fundraisers emphasised how passionately people feel about this improved facility. I would like to thank every person who contributed as every penny will go towards making a potentially lifesaving difference to patients battling this cruel disease.”

“I and three other amateur cyclists rode 10,400km last year as we took on all three grand cycling tours to raise funds towards this appeal. The 3 Tours Challenge was just one of the hundreds that took place to raise funds for this centre, which saved my life back in 2003.

“I opened the centre in 2006 and I am immensely proud to have played a part in this inspirational project.”

Jenna Ostrowski, a 33-year-old Corporate Solicitor at KPMG Birmingham, was diagnosed with Acute Myeloid Leukaemia in July 2017 just days after Cure Leukaemia CEO James McLaughlin had given a presentation at her offices about the charity.

She said: “When I heard James talk about the charity I was emotional because I lost my uncle to the disease a few years ago. Little did I know but I actually had leukaemia at that point. Since I’ve been diagnosed I haven’t actually been treated at the centre but was lucky enough to have a tour of the facility before Christmas. Knowing what I know now about the treatment process for this disease I can see what a huge benefit the expanded centre will have for patients.

“I am delighted to have played a part in raising funds through family and friends to help make this a reality and I am looking forward to setting foot in the building when it reopens in January.”

View photos from throughout the project below: 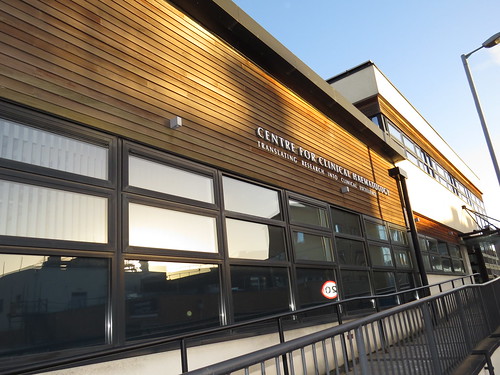