The appeal, held at the offices of charity partner KPMG in Birmingham City Centre on Tuesday January 17th, also featured many patients who are alive today thanks to the Centre and emphasised its life-saving work since 2006 and why the expansion will offer hope to so many more suffering from the disease. 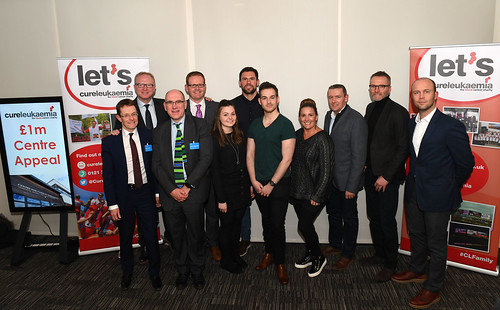 With Cure Leukaemia’s support Birmingham is leading the way, internationally, in the fight against blood cancer. World-class clinicians and scientists based at the CCH and the University of Birmingham are driving forward groundbreaking new therapies and saving lives in the process.

Since the CCH was opened in 2006 by Patrons Geoff Thomas and Ashley Giles MBE patients have been able to access a portfolio of over 25 groundbreaking clinical trials that were not available through standard care. By delivering these often world first clinical trials to patients who have exhausted standard treatments these trials have not only save lives, but also contributed to the global understanding and treatment of blood cancer.

The success of this highly effective clinical trials programme has resulted in the Centre running at maximum capacity. The £3.5m expansion of the CCH, however, will allow the continued growth of this world-class programme; giving patients access to double the number of potentially life-saving and pioneering clinical trials and by allowing stem cell transplants to be performed as an outpatient for the first time.

The Local Growth Fund (LGF) has granted £2.45m to allow work to begin on this project in early 2017 and by the autumn the expanded Centre will be ready to treat patients. Cure Leukaemia has made a commitment to raise the additional £1million capital funds by December 31st 2017 to ensure this project is fully funded.

“Cure Leukaemia’s unique model of patient central research has allowed leukaemia patients to access millions of pounds worth of the very latest treatments prior to their availability through standard care.”

“This model of accelerated access has saved lives, created jobs, driven inward investment, quickened the assessment of new therapies and provided an innovative blueprint for the treatment of many other diseases through the clinical trial process.”

“This is exactly what the Government’s Accelerated Access reforms are designed to support. The United Kingdom’s leadership in this area is now being followed globally.”

"The work Cure Leukaemia supports at the Centre for Clinical Haematology is of global significance in the fight against blood cancer and that’s why I hope and believe that this £1million appeal in addition to the £2.45m from government will be successful. There is no doubt that with increased capacity this Centre will save more lives and hasten progress towards the eradication of this terrible disease."

Councillor John Clancy, leader of Birmingham City Council, said: “I’m happy to lend my name to the fund-raising efforts to make sure a much-needed expansion of the Centre for Clinical Haematology can go ahead.

“Centres of excellence like this are in the very front line of Birmingham’s ambition to become a world-leader in the fast-growing life sciences sector.”

“Once established, the Centre’s capacity for research nurse positions, clinical trials and patients treated will be doubled. Over 100 jobs will be created; further enhancing Birmingham’s reputation for clinical excellence in the life science sector and patient experience will be transformed by amalgamating all haematology and blood cancer services into a single space, from out patient services to clinical trials.

“These are just some of the benefits that the Centre’s development will enable. Not only will the Centre immediately increase the number of lives saved but also hasten global progress towards establishing effective treatments for all blood cancers within our lifetime.“

To achieve the additional £1m Cure Leukaemia is approaching Trusts, Foundations and major businesses from across the country to become founding partners of the new Centre. Funds raised from major events throughout the year will also go towards the target including the Brindleyplace Dragonboat Race, the inaugural Velo Birmingham cycling event in September, Glynn Purnell’s Friday Night Kitchen in October and the first ever Birmingham International Marathon in the same month.

Another major cycling event taking place in 2017 to raise funds will be the ‘Three Tour Challenge.’ Five amateur cyclists, including Geoff Thomas, will be cycling the Giro D’Italia, Le Tour de France and La Vuelta consecutively, one day ahead of the professional riders. This 6,348 mile challenge to ride all three grand tours is one that even the professional cyclists avoid and yet Doug McKinnon, James Maltin, Hayden Groves, Marcus Leach and Geoff will all embark on the challenge in May with a fundraising aim of £1million for Cure Leukaemia.

Keen cyclists can join the team for some or all of the challenge with a range of packages available to take part. To find out more go to: http://www.3tourschallenge.com

Donations to the appeal can be made here: http://www.justgiving.com/fundraising/bih